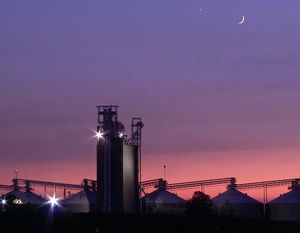 What is agricultural production

Farming and agriculture have played a major role as stimulus in the development of civilizations. A vast majority of human populations toiled for agricultural production until the Industrial Revolution.

It is estimated that more than 40% of the world population will be living in urban areas by 2020 and significant increase in the world food production will be required to feed the ever-increasing population especially in the developing countries.

The food habits will be changing with increased shift towards the meat-based diet. Increased meat production can be achieved only by increased agricultural production to meet the feed requirements of the livestock. This diversion of cereals as animal feed gives rise to their demand leading to price rise.

There will be a negative impact on the affordability of even common cereals like maize by the poor and weaker sections of populations in the third world.

A sustained effort the for a second green revolution is necessary to double the agricultural food production especially of wheat, maize and rice. However a high price in the form of negative ecological impact in a global level will be encountered.

More areas of land has to be made arable and irrigated cropping patterns with two or three crops in a year have to be considered. More of nitrogen and phosphorus have to be used with the risk of depletion of micro-nutrients. The requirement of increase in agricultural land can reduce the forest and green cover of the nations with detrimental impact on the climate.

The increase in agricultural production will have multiple impacts on the environment and accelerate the global warming.

Already human activities in industries and agriculture has affected the nitrogen cycle. In the last century, before industrial revolution, the primary source of Nitrogen fixation was only biotic in nature.

Cultivation of crops, energy production, fertilizer production and other industrial activities have substantially altered the Nitrogen cycle and account for much of this anthropogenic N. Nitrogen-oxides are accumulating in environment and are having a negative impact on the terrestrial and aquatic ecosystems.

Nitrous oxide is one of the green house gases (GHGs) and contributes to global warming. Atmospheric Nitrous oxide, apart from contributing to air pollution, causes acid rains and increases the rate of eutrophication of the aquatic systems. Further nitrous oxide affects the stratospheric ozone and causes its depletion.

The efforts to increase the agricultural production has affected the quality of the soil. The top soil has been disturbed and there is erosion and runoff of top soil.

The excessive use of Phosphorus during fertilization of crops has caused removal of Phosphorus from the agricultural lands, its accumulation in the water bodies and eutrophication of the aquatic ecosystems.

Though crops have the positive role in regulating CO2 levels in the atmosphere, their harvesting in large scale can cause a sudden spike in CO2 levels. The increased nitrogen fixation and increase in levels of nitrous oxide in atmosphere can increase the rate of global warming.

Livestock are the major contributors of the green-house gases like methane. Global warming can lead to increased sea-levels and submersion of coastal regions and erratic seasonal changes and resultant droughts and floods.

Excess use of water can lead to its scarcity and a competition may arise between use of water for agricultural production activities and other uses.

A sustainable agricultural production system which will have the least impact on the environment, have low energy-needs and give drastic increase in the production of maize, wheat and rice is the need of the hour.

The productivity of the soil has been found to be greater when there is crop rotation and inter-cropping. Biodiversity of the crops helps in increasing the yields. Sufficient research, regulations and policy decisions are necessary for achieving it.

Water management systems and regulating cropping seasons are to be fine tuned to reap the benefits of the seasonal water availability. Frugal use of water for irrigation with least energy input must be attained with changing irrigation methods to sprinklers and drip-irrigation.

The available arable agricultural land must be effectively used to produce two to three crops in a year. To optimize land usage urban agricultural methods like vertical farming may be encouraged. Recycle of crop and livestock waste at every level must be done to produce bio-fertilizers.

Farmers must be properly educated and advised about optimal use of fertilizers for agricultural operations. An integrated agricultural pest control system must be evolved, which can minimize the use of pesticides with effective biological control of pests.

Further agricultural research has to carried out to evolve transgenic crops having high yields, resistance to drought and pests with least negative traits.