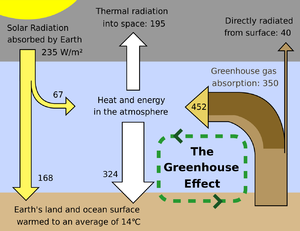 Farming is very much dependent on climatic conditions and is highly exposed to climate change. But farming also contributes to the climate change by releasing greenhouse gases into atmosphere.

Climate of a region is the main factor in selection of types of crops, time of sowing and harvesting. The climate, patterns of monsoons and rainfalls differ from region to region. The food preferences and principal crops of a region have also evolved based on the climate.

Tropical regions have heavy rain falls and crops must tolerate water logging. Certain region where the rainfall is scanty, arid-zone agriculture practices have to be followed and suitable crops have to be selected.

In places where snow falls occur, the crops have to be grown in a time schedule, so that they be harvested before the onset of snowfall.

Climate change and its effects on farming

There are obvious results of climate change which are now affecting farming activities. The average annual and seasonal rainfall has been decreasing steadily affecting all aspects of farming in many regions. There is a steady increase in heatwaves, droughts, storms and floods across many nations. These frequent extreme conditions will have immediate and cumulative effects as the time passes.

Influence of farming on climate change

Farming affects the delicate global carbon and nitrogen cycles through sequestration and release from plants and soil. Farming also contributes directly or indirectly to greenhouse gas emissions from fuel and fertilizer production and use, soil and waste management.

Most of the nations are seized of the grave problem and working on mitigating the effects of weather change as well as on reducing the contributions from farming.

Some of the measures include:

Weather friendly farming is the latest concept by which apart from climate change mitigation, efforts are to be made to stabilize the climate and environment by farming.

Agricultural production is essentially is the process of converting primarily the solar energy into forms of food energy for consumption by humans and livestock.

Some of the climate friendly efforts are: