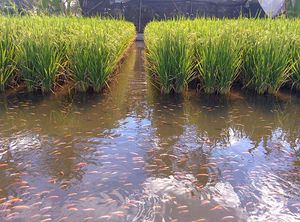 What is freshwater aquaculture?

Freshwater aquaculture is the farming of freshwater aquatic organisms including fish, molluscs, crustaceans and aquatic plants. In aquaculture, when compared to capture fisheries, there is some form of intervention to enhance the production and also there is ownership of the stocks under culture. Traditionally aquaculture has been under practice in China (carp or Cyprinus carpio), Japan (seaweed), Australia (eels), ancient Egypt (tilapia), Rome and central Europe for more than 2000 years.

The harvest stagnation, over exploitation and the current reduction in the quantity of fish caught in wild capture fisheries has necessitated diversified methods of extensive as well as intensive aquaculture practices. Of all the aquatic organisms suitable for freshwater aquaculture, fish is the most important, considering the extent of its aquaculture as well as the quantity produced.

Unlike capture fisheries, in aquaculture, the requirement of special conditions increases in proportion to the intervention methods. There are many factors affecting the aquaculture fisheries. Physical, chemical and biological factors of the water and their management is crucial for success of aquaculture.

Water depth: Water levels are very important for maintaining quality of water. If sunlight can reach the bottom of the pond, its productivity in increased. however, in very shallow ponds the water can very easily heat up and and stress the cultured fish. A depth between 1-2 meters is considered ideal.

Further the temperature fluctuates during the day and night period. Seasons also change the water fluctuation range. As the coldwater fish and tropical fish have well defined limits of temperature tolerance, this has to be taken into consideration for selecting the right candidate for the aquaculture.

Factors like water turbidity, availability of light, its intensity and penetration and water coloration have impact on the production of fish. These also have to be managed to keep them at the optimum.

pH of water: The optimal range of pH for fish and shrimp is between 6.5 to 8. Ph in lower or higher ranges will cause distress to the cultured organism and may even kill them.

As the phytoplankton is the producer of DO in sunlight, the DO levels reach the highest at about 3PM in the evening. The DO levels are the lowest in the early morning. The presence of gases like CO2 and NH3 and higher temperatures reduce the dissolved oxygen.

Traditionally fish seed were collected from natural resources and segregated to remove unwanted species and predatory fish. The segregated seed is then sized and uniform sizes are grown in nursery ponds before transfer to the aquaculture ponds. With the advent of induced breeding technology, the seeds are hatchery produced.

Proper feeding and fertilization are very important for achieving goals in aquaculture. Fertilization, though initially helps in the growth of hatchlings and fingerlings, is not sufficient for raising bigger fish in higher stocking densities. The fish have to be given sufficient artificial feed or formulated feed for achieving the targeted growth.

Like all animals, fish also require, proteins, carbohydrates, essential fatty acids, vitamins and minerals for their optimum growth. Any deficiency in any of these nutrients will have an adverse effect on the growth and well being of the fish. Fish meal has all the amino acids required for the fish growth. Fish fed with formulated feed containing fish meal have shown greater growth rate.

Fish, like other animals, are prone to diseases. A number of parasitic and nonparasitic diseases affect the fish grown in confined aquaculture. The deterioration in water quality and improper feeding generally contribute to the disease attacks. Fish can be affected by viral, bacterial and fungal diseases.

Bacterial diseases include columnaris, furunculosis, vibriosis, dropsy, cotton mouth disease, fin or tail rot, and tuberculosis. Saprolegniasis, ichthyophonosis and branchiomycosis are some of the fungal diseases affecting fish. Costiasis and Ichthyophthiriasis are the protozoan diseases affecting cultured fish. Dactylogyrus and gyrodactylosis are the helminthic diseases frequently encountered in aquaculture.

Cage systems are getting greater attention all over the world for the commercial use of the open water bodies. Modern techniques, including feeding, are employed to get higher yields. One great disadvantage in cage aquaculture is the growth of algae and fouling organisms on the mesh, cutting off water circulation and oxygen supply. Earlier cages were made with bamboo or metal rod frames covered with net materials. Now advances have been made in the use of alloy meshes which discourage growth of fouling organisms and algae.

In semi-closed freshwater aquaculture systems water is taken in from natural sources and made to flow through the ponds or raceways. Water may be filtered to keep the predators out. There is greater control over the culture.

When suitable land and water available large stagnant ponds are constructed and after filling them up, fish seed (stocklings or fingerlings) are released into them in low densities. Organic and chemical manures are used to get blooms of phyto and zooplankton. Occasionally feeding may be done. After considerable time the ponds are harvested. This type of freshwater aquaculture requires low financial, management, technology and energy inputs.

Though this freshwater aquaculture system is similar to extensive culture, there is regular feeding and partial water exchange. The stocking rate is also higher, giving higher yields in shorter time. This type of aquaculture requires medium level financial, management, technology and energy inputs.

The basic principle of integrated composite fish aquaculture is the stocking of compatible, fast-growing fish of complementary feeding habits. They will occupy different ecological niches and contribute to productivity of the whole column of water. In this multi-species freshwater aquaculture, ponds are stocked with bottom feeders, column feeders and surface feeders. The productivity of each niche is well utilized in this system. A disadvantage of this type freshwater aquaculture is the prolongation of the culture time to accommodate the variance in time taken for attaining harvestable size by different species.

In developing countries, especially in Asia, freshwater aquaculture is done traditionally in small family holdings. The fish farmers have integrated their daily backyard activities with the freshwater aquaculture. Fish-cum-duckery, fish-cum-poultry and fish-cum-agriculture have been very successful. Cattle farm manures are utilized as such in the fish farms or used in biogas plants and the slurry is recycled for fish culture.