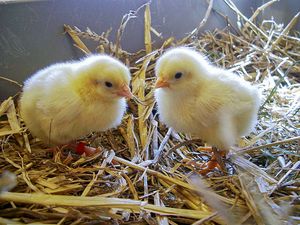 Poultry farming is part of animal husbandry and it pertains to raising domesticated birds for their meat, eggs, fatty oil, feathers and for traditional medicinal purposes. Though raising chicken for meat and eggs is the most important poultry farming activity, birds like turkey, geese, ducks, guinea fowl and emu are also raised.

Chicken of Asian origin were first domesticated for the purpose of cockfights. Many indigenous poultry breeds with strong and powerful legs with aggressive temperament were bred and evolved with least concern for their meat and egg producing traits. However this trend changed with banning of cockfights in England in 1840s and many nations followed suit in banning the cockfights. Thereafter chicken were raised for their meat and eggs.

The knowledge gained in breeding fighter cocks was used to raise chicken breeds with higher meat yield and egg production. However to produce poultry chicken having high level of both meat and egg producing qualities was found to be non-achievable and nonviable as the food conversion for flesh production and egg production followed different paths.

Separate high yielder of meat and eggs were evolved by cross breeding, line-breeding and then by inbreeding. The white leghorn is the most popular egg-layer and leading egg producer in many countries. The Rhode Island Red (an American breed), Cornish Cross and White Rock are some of the top meat producing breeds.

Poultry meat and egg are cheap and important sources proteins and other essential nutrients for us. Formulating chicken-feed is highly perfected technology ensuring maximum utilization of nutrients for growth of muscles, fat and bones and increasing egg laying capacity.

Along with required levels of nutrients like proteins and carbohydrates, the requirement of minerals and micro nutrients is fulfilled to achieve upto 2:1 (2kg of feed to produce one kg of meat) conversion rate. Antibiotics and growth promoters are also added to the feed of the poultry to prevent/control diseases and to stimulate appetite.

Turkey is raised mostly for meat and turkey farming is an important agricultural practice. Male turkey (tom) is usually 40-50% heavier than the females. The feed conversion rate has highly improved with improved breeds and and scientific feed formulation. With good marketing practices the rate of consumption has increased many folds. In countries in Americas and Europe turkey is raised in many rural households and poultry farms.

Duck raising is universal and in most of the countries it is a small scale farming enterprise. With the large scale expansion of chicken industry duck rearing is getting reduced. However commercial high tech poultry industries have come up exclusively breeding ducks for meat purposes in countries like United states, Netherlands and England.

Goose raising is practiced all over the world and is a minor farming activity. In European countries like Germany, France, Poland and Austria there are commercial poultry farming of geese. Toulouse (gray) and Emden (white) are the two most important breeds used for meat production.

Guinea fowl is raised along with chicken for meat purposes. Commercial raising of emu (an Australian flightless bird) is being done in many countries and the emu meat which is lean is akin to poultry meat. Emu fat is believed to have many medicinal properties and it is found to give relief from arthritis.