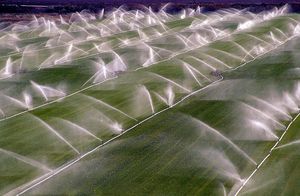 For rain-fed crops irrigation helps in times of short fall in rain. It also helps in protecting crops against frost. Irrigation of agricultural field, especially of paddy and wheat, helps in weed control and prevention of soil consolidation.

In its broader sense the term irrigation is used in medical and dental fields, drainage, sewage disposal and mining science. In contrast drainage is natural or artificial removal of surface or sub-surface water from a land or field.

Evidence of agricultural irrigation is found by archaeological investigation in Mesopotamian plain. The crops were regularly watered throughout the crop season (Perennial) with a network of small canals formed in the fields.

In ancient times Egyptians (6th millennium BCE) adopted basin methods by holding the flood waters of Nile by forming dikes. Archaeological investigations in Zana Valley of the Andes Mountains in Peru, revealed the presence of the remains of three irrigation canals dating back to 4th millennium BCE, the 3rd millennium BCE and the 9th century CE.

In the Indus Valley Civilization (3000–1500 BCE) remains of canal systems were found. The Qanats method of irrigation of Persia (800 BCE) is the oldest method still in use. Irrigation system developed in ancient Sri Lanka dates back to 300 BCE and comprised artificial reservoirs and a system of underground canals.

In China, the Dujiangyan Irrigation System was built in 256 BCE. This system covers enormous areas farmlands even today. Presently the lands under agricultural irrigation are estimated to be more than 3,300,000 km2, close to the size of India.

Many types of agricultural irrigation techniques have been invented and evolved. The basic goal is to distribute water uniformly for the entire field. All plants should get the required amount of water. Techniques have evolved in respect of the type of crop, its water requirement, free availability of water, type of terrain, soil condition etc.

Surface or flood agricultural system aims at completely covering a flat piece of agricultural field. This is the most common method and used for rice or wheat crops.

Localized irrigation aims at distributing water to each plant or close to it. This method usually works under low pressure and micro-sprinklers and bubblers come under it. This method is very useful where the soil's water retention capacity is low and plant do not require much water.

In drip or trickle agricultural irrigation water is delivered near the root zone of the plant in a very slow trickle or drop by drop. This is the most efficient method with least wastage of water.

Evaporation and runoff is minimal and the fertilizer requirements of the plant can be delivered efficiently through this agricultural system. Many sophisticated modifications can be made to deliver the requirements individually to each plant.

Sprinkler irrigation systems deliver the water overhead and they can be permanently fixed or made movable in the agricultural field. The sprinkling direction itself can be fixed in one direction, in a complete circle or in a half- circle.

This system requires high energy, requiring high pressure pumps operating on electricity or diesel. There are many modifications of this system like central pivot and lateral move irrigation systems.

There are many sources of water for agricultural irrigation. Underground water is exploited by digging wells or driving bores. In some places springs may deliver the underground water to surface. The water from rivers and streams may be diverted to flood fields.

Dams may be constructed across rivers to hold water and raise its levels for gravitational delivery by a network of agricultural canals. In some places waste water is treated for reuse.

Many problems have arisen in use of water for agricultural irrigation. The foremost is the right to water. As most of the riverine water sources pass through many international boundaries, the right to water and the basis of water sharing have become the cause of irritants between nations.