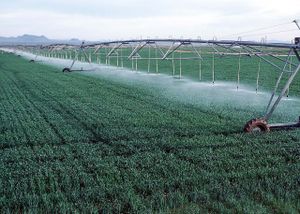 What is crop production system?

Agricultural production system is defined by FAO as "An agricultural system is an assemblage of components which are united by some form of interaction and interdependence and which operate within a prescribed boundary to achieve a specified agricultural objective on behalf of the beneficiaries of the system."

The availability of resources and the constraints in the availability of any particular resource decide about the crop production method for the farm. The climate and geography of the farm are major deciding factors for the type of farming activity to be taken up.

The crop production system is also governed by interrelationships between individuals, groups, communities and institutions. It draws its strength from the elements constructed or proposed for specific use through relationships of an economic, social, religious or political nature.

The socio-economic pressures, political pressures and the policy of the government are major deciding factors deciding the pattern of farming activity. The crop production technology has evolved over time, influenced by both natural and social processes.

The early nomadic life was dominated by herdsmen who moved animals like cattle, goats or sheep in search of water and suitable grazing fields. They hunted animals and gathered available food around them.

Then they resorted to shifting cultivation and bush fallow system. Their only input being broadcasting of seeds. The virgin bushland or forest was cleared and left fallow for some before planting. The fallowing of cleared land helped in increasing its productivity. Once the productivity goes down, the early farmer moved to some other place and resorted to clearing, fallowing and planting.

The early farmer lead a life of subsistence farming wherein he produced food crop with simple farm tools on small land holding to sustain his family. The whole family took part in crop production. The crop is mostly rainfed. This method is totally depended on seasonal rains and any vagary leads to total loss of crop.

The early progressive farmer with inputs like irrigation and improved cultivation methods, started getting greater yields, which prompted him to trade the surplus with other farmers. This opportunity to trade the surplus in crop production led to increasing the land holding as well as finding methods to increase productivity.

Several productivity based improvement lead to exclusive cropping methods like, cereal or grain based, root crop based, legume based cultivation. Then the farmer found that mixed cropping pattern like grain and legume and mixed plantation gave him increase in earning.

Presently, the main focus of agricultural industry lies on challenges faced by producers in harvesting, transportation, storage and marketing of the farm produce.
Popular posts in Wiki Farming