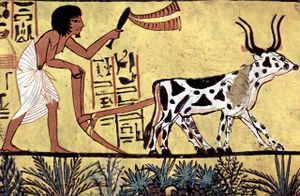 The history of agriculture dates back to more than 13,000 years. Farming developed independently in many parts of the world. The transition of man from hunter-gatherer is believed to have taken place soon after the last known ice age.

Many hypotheses and theories have been proposed by many historians and anthropologists. Man became increasingly sedentary and the food gathered was becoming insufficient. He started protecting wild plants and domesticating them.

Some scholars consider this as co-evolutionary adaptation of humans and plants. However to exactly identify the origin and history of agriculture is not possible as the farming practices were existing before the invention of 'writing'.

Archaeological and anthropological evidence from ancient sites across North Africa and Asia suggest the use of wild variety of grains.

From 9500 BC onwards there is clear evidence of use of flax, emmer wheat, chickpeas, enikorn wheat, bitter vetch, hulled barley, lentils and peas by the settlers of PPNB (Pre-Pottery Neolithic B) sites in the Levent (Eastern Mediterranean).

Farming was well established on the banks of Nile River by 6000 BC. The Sumerians history indicates that they started intensive farming and mono-cropping by c. 5500 BCE. They accumulated the excess produce for off-seasonal use and bartering.

Barley was the primary crop in the Sumerian history. They also grew wheat, flax, dates, apples, plums, and grapes. The study of history of all the civilizations (3000 BC -2000 BC) in the middle East and West Asian regions indicates that they had well established farming practices.

Recent historical discoveries in Europe have shown that there is evidence of plant foods in the Franchthi Cave in Greece dating back to ca. 11,000 BCE. The archaeological excavations of Klimonas in Cyprus dating between 9100 and 8600 BCE show the presence of remains of carbonized seeds of local plants and also grains like emmer wheats probably introduced from the Levantine coasts.

In the Indian subcontinent there is historical evidence of domestication of wheat, barley and jujube by 9000 BCE. Mehrgarh culture by 8000-6000 BCE started domestication of sheep and goat. In the Indus Valley Civilization the concept of irrigation was developed by 5000-4000 BCE.

Animal-drawn plough was in use in the Indus Valley Civilization by 2500 BCE. By 8000 BCE rice was part of the diet of the subcontinent. Wheat, peas, sesame seed, barley, dates, mangoes and cotton were grown in the Indus valley.

In the historical Americas wild teosinte was transformed into early maize more than 6000 years ago. Aztecs were active farmers and had developed irrigation systems and chinampas.

History of domestication and cultivation

The transition of hunter-gatherers to farmers first started by leaving some of the gathered wild crops to grow from the seed left behind or to grow back from the stumps of the harvested plants.

Deliberate sowing or other management of wild plants was done to increase the yields. In this form of cultivation there was no attempt to modify the wild plants. Then the farmers started domesticating the crops which led to genetic changes. In domestication plants got modified from their original wild parents through conscious or unconscious human selection.

The process of domestication was gradual and involved trial and error. The domesticated plants often differ from their wild relatives. They may have a different ecological preference and a wider geographic range.

Their dispersal mechanism, seed dormancy, photoperiodic controls and breeding system may have totally changed from their wild parents. The cradles of domestication of plant and animals were Near East Asia, South and North China, Sub-Saharan regions of Africa, South America, Central and Eastern USA.

Great Britain saw a historical massive development in farming productivity from 16th century onwards. Rapid mechanisation in the later part of 19th century propelled the development of farming industry and by the end 20th century many nations were reaching self-sufficiency in food production.