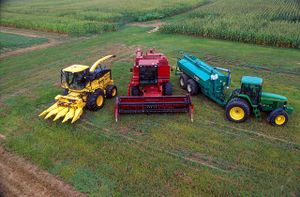 Major native crops like potato, maize and tobacco were introduced into Europe, Africa and Asia, whereas crops like sugarcane and wheat were introduced to Americas. This has lead to drastic changes in the farming practices in the whole world, even changing the food habits of the resident populations.

Considering the modern global scenario, the traditional farming is based on ancient methods and is completely dependant on natural conditions and natural vagaries. In many least developed countries this type of subsistence farming is still practised, at least in some remote villages.

The main occupation of the major population in such places is farming. The land holdings are small and the production is aimed to reach self-sufficiency. The agricultural activities are carried out manually. For some tasks animals are also used.

The traditional farmers seek to work effectively with whatever resources are easily available. They depend upon the small piece of land owned by them or take it on lease from the affluent neighbors.

They depend upon the rainfall for their agricultural practices. In some places the surplus water from the ponds and lakes may be used for irrigation. In traditional farming conventional primitive techniques are relied upon.

There is near absence of agricultural machinery. They use the local seeds and local plant protection methods. They have limited capacity to change their method or rather they avoid changes. The produce is locally consumed and some small surpluses are traded.

Up to 15th century the world scenario was similar to traditional farming. 19th and 20th centuries saw the mechanization in farming equipments. With the advent of tractor power, modern extensive farming methods got a fillip. The synthesis of Ammonium nitrate by Haber-Bosch method helped in increasing crop yields by many folds.

In the later half of the 20th century pesticides, selective breeding and biotechnology have further contributed to the yield of crops. The modern farming methods also brought in negative factors like loss soil productivity, pesticide resistant pests, excess use of water and water shortages.

With mechanization in many aspects of modern agriculture, the farming work-force is steadily getting replaced by machinery, leading to unemployment and poverty in plenty.

Modern agriculture has become capital and technology intensive to cater to the extremely productive and competitive market environment. This modern lopsided development has led to environmental crisis.

The shift towards monocultures which are extensive as well as intensive has overrun the earlier self-regulating mechanisms in crop production such as rotations of crops and diversification of crops.

There is a sharp decline in the crop diversity, genetic diversity, productivity and resistance to pests. The modern agriculture systems have become highly vulnerable, unsustainable and fragile and are immensely dependant on high inputs.

In these modern models there is widespread contamination of the water systems with fertilizers, nitrates and insecticides. The natural fauna and flora of the water ways are affected and altered.

The modern intensive monoculture of food grains is causing long-term ecological damage. Unlike modern intensive methods, sustainable agriculture is based on the principles of ecology. No doubt food production has to be enhanced to meet the ever growing demands.

Need of the hour

Human needs for food and fiber has to be met. But to meet these requirements of modern man, an economy based on the available natural resources without any the degradation of the environmental quality is needed.

The implementation of the modern alternative agricultural practices is stalled by the pressure for attaining self sufficiency in food production and for catering to food exports.